As long as Stephen can remember, he has always loved music. At the young age of five he had big dreams of being the fifth Beatle. That whole British band thing never panned out, but, he has found something just as cool, if not cooler. He has realized his dream of playing before crowds of screaming fans – the very young variety. The bonus is that through his play (it’s not really work if you love it), he is able to share his passion for music with them while simultaneously aiding in their education. 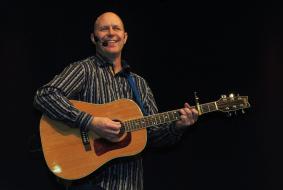 Stephen Fite is an award-winning musician/writer whose albums have received eighteen nationally recognized honors. Suitable for the classroom, car or living room, his upbeat brand of children’s music spans the spectrum from Rock to Reggae, Pop to Blues, Dixieland and many other styles.

His songwriting and recordings span nearly three decades with 17 CDs and 1 Concert DVD as testament to his work in Early Childhood. Those years of work have led him to one undeniable conclusion; children learn best when they are moving and actively involved. That belief is his daily focus and prime motivation for creating and producing tunes that do just that: let children move.

Stephen’s shows have been described as an “interactive celebration of music and learning.” Geared for ages 3 to 7 years, Stephen combines a solid hour of music and movement with generous helpings of rhythm, repetition and rhyme to create a festive buffet of entertainment and fun. For children, the concert experience is exciting and motivating as they become active participants from the opening song. For teachers and parents, it is both relaxing and inspirational as they sit back (if they can stay in their seat) and enjoy the children’s individual performances.

Since the mid 80s, Stephen has performed over 1,100 concerts for over 850,000 children in states throughout the South and Midwest. His themed Concert Tour is now starting on its 21st year and is a yearly must-attend Field Trip for many schools. To find out if his Tour is coming to a city near you, check out his Schedule, or call us at 800-234-9228.

Stephen’s presentations are music-filled and motivational, but more importantly, informative and full of ideas educators can use immediately in their classroom. Stephen will bring to teachers a renewed enthusiasm for using music to span their curriculum. To book a Stephen Fite Workshop or Keynote call Melody House at 800-234-9228.

Stephen’s Piggyback Song Ideas For You

Stephen has written and found some fun piggyback tunes that you can use during your Morning Meeting Time, Circle Time, Calendar Time or for Transitions.  Click to download the article and print out a copy.

Fite (sounds like kite), n. Stephen,  1. writer, performer of funtastic educational music for the classroom and living room.  2.  children’s musician from Oklahoma.  3.  silly, goofy, energetic, inclined to push buttons with people named Joe.  4.  one who looks for fun in everything he does.