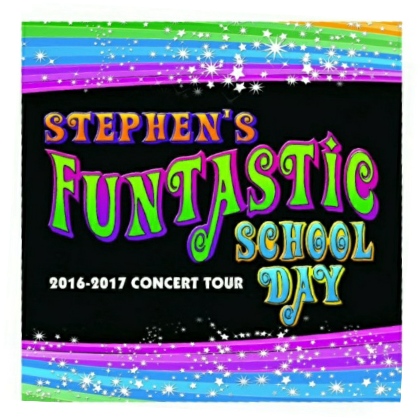 Stephen Fite will be launching his 2016-17 Stephen’s Fantastic School Day Concert Tour on October 26th in Cordell, OK. This will mark his 22nd year of presenting this type of Field Trip show for students throughout the Southeast and Midwest. He recently sat down with me to share his thoughts about time, themes and this year’s Funtastic Concert. “Of course it sounds cliche to say this, but these past two decades have flown by. The children who attended some of the first shows back in 1995 have already graduated from college and most likely have children of their own. When you think about it in those terms, it truly let’s you know you’ve been at this for quite awhile. Lately I have been comparing it to teachers who tell me they have been teaching for so long they now have the sons or daughters of some of their first students.”

The number of children, teachers and parents for which he has performed is itself staggering. At last count, the figure was just over 850,000. Anyone who works in Early Childhood will agree that keeping children engaged for a solid hour is a monumental task in and of itself. However, the real work has been in trying to keep the teachers/schools interested in attending year-in and year-out and has always been at the forefront of any decisions made on content, songs, etc. “It has been challenging trying to keep the Tour fresh each year. Many of the schools who attend each season bring their Pre-K thru 1st Grade Classrooms, so that means I have to come up with a new theme each year. The office team has had many discussions throughout the years, throwing out theme ideas and trying to decide which ones were feasible in a concert environment that is essentially a one-person show.” It wasn’t until the 14-15 season that Stephen repeated a show. “The Giddy Up & Learn western theme was such a huge success that many teachers, when asked what they would like to see next asked for an encore of that show. So, to use a cowpoke parlance, we kindly obliged.”

This year’s concert is itself a repeat and one of Stephen’s favorites. The show takes children on a “funtastic” journey of learning, led by their Super Substitute Teacher, Stephen Fite. “I wrote the script in such a way as to provide non-stop interaction combined with music & movement and several audio cues to keep the children engaged and participating for the full hour. When I was almost finished with the writing, I remember thinking to myself, there are so many more lines and cues than I had ever attempted before. But the first show in McAlester, OK went great and the children really seemed to enjoy everything about the concert.” There are even a couple of Knock-Knock Jokes that will give the children a chuckle as well as a frog puppet named Fernando who loves flies and PE. “The concept that sticks out to me about this particular theme/show is that learning is Funtastic! I am sharing with the children just how exciting it is to learn something cool every time they’re in school. After the show is over, I want children to leave with a new perspective on learning and knowledge. I want them to genuinely consider learning and knowledge to be FUNTASTIC!”

Even though this tour has yet to begin, I asked Stephen if he might give us a hint or two about plans for the 2017-18 Tour as he usually does not reveal anything about the theme until he’s off the road. “I was actually planning on doing a Jungle theme this year. I already had a couple of fun tunes written about Animal Habitats and the Oxygen Cycle as well as the theme song called, In the Jungle. However, things got a little out of whack during the summer and I didn’t feel that I had enough material written to put together a quality show for the children and teachers. Every year I try to outdo the script from the year before. I think that’s only natural. We all want to grow and move forward in whatever we do in life. So, I decided to put the Jungle theme off until next year or maybe even the year following. I actually have a couple of people asking me to bring back the Superheroes of Knowledge show. I’ll be writing while I’m on the road and hopefully pulling in some good ideas from teachers and children.”

If you have never attended a Stephen Fite Concert, consider making this year your first time. You can check out the Tour Schedule and other info on the show by clicking on the Concert tab at the top of the page. You can also make your reservation at the Melody House offices by calling 800-234-9228, M-F, 8:30 to 4:30 CST. Hope to see you on the front row because this year’s show is going to be, FUNTASTIC!